Back in 2015, following the advice of our Agronomist, Julian Mooney (Turfgrass) we commenced on a twice yearly Graden programme on our greens to improve plant health and consistency in playability. By 2017 we were already beginning to see some of the benefits of this programme of work, with Julian reporting a dramatic improvement in terms of playability in the past 12 months.

While the two cancellations were understandable, it had taken twice-annual Graden treatments to restore firmness, drainage, and speed in greens. The advice given following skipping two operations over the previous 24 months was that it will in time impact the playability if a more consistent programme is not followed.

Consideration was then given to carrying out a double Graden treatment in the Autumn of 2020, however, after a small amount of sampling this was felt to be too invasive a treatment. The agreed way forward with our Agronomist was to trial a double aeration programme of Graden immediately followed by hollow-tining once a year. This approach was first applied in November 2020 during course closure due to the pandemic. The soil sample results suggested this had been a success and the decision was made that the same programme should be targeted for late in 2021.

The timing of such invasive work is always dependent on weather conditions, in terms of both carrying out the work but also the speed of recovery.

Having scheduled the work for November 2021, this was not possible due to excessively wet conditions. The first window of opportunity did not present itself until mid-January, but a spell of sudden frosts prevented this. Finally, a window of opportunity presented itself in early February and the work was completed in 3 days. Unfortunately, since the work was carried out, we have experienced significant wet weather with 3 back-to-back storms. This has resulted in extremely soft greens which limits the amount of work possible by the green staff to aid recovery and improve the playability of the greens.

Some members have queried why the work was not delayed further until improved recovery times were more certain. However, with the ever-changing British climate, there can be no guarantee of the future weather pattern, and as stated previously it was very clear we should not mis a further treatment.

There has been a lot of golf played over the winter months and the course is showing signs of high wear in many places. I raised this issue with our agronomist and his view is that the bare and muddy patches

are caused by the high number of worm casts combined with heavy usage of the course. This is exacerbated by the use of trolleys which squash the worm casts and leave an unsightly, muddy mess but these are expected to return to normal when the warm weather returns.

It is worth noting at this point some of the key weather stats which Jeremy and his team are having to deal with on a regular basis. Rainfall levels in October tend to set the tone for playing conditions throughout the winter. Per the chart below you will see the last 3 October's have had significant levels of rain which have resulted in the very wet course conditions we have been experiencing. Interestingly, before this, these levels were seen back in 2013, when we subsequently carried out some significant drainage work. 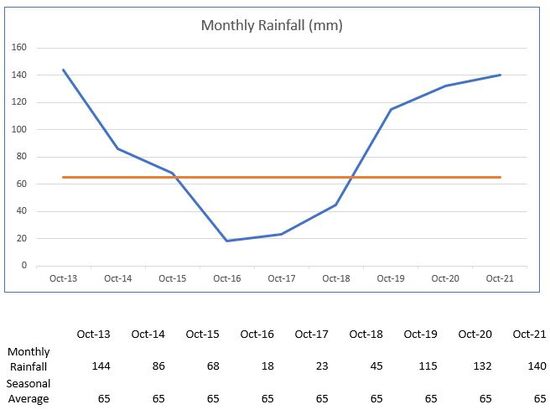 To help improve the playability of the course in the future the team will be investigating the process of Top Dressing the fairways which have the following benefits: -

In addition, I am very conscious that the course appears to be wetter than normal over the last 6 months and I have commissioned a water management report to identify why certain areas have become wetter than they used to be and where the water flows are now and where will they be in the future.  This report will also identify where the best place(s) water should be stored for the future to reduce our reliance on our borehole thus saving costs.

Clearly once our new Course Manager, Thomas Flavell is in place we will ensure he is brought up to speed on these issues and has the opportunity to meet with our Agronomist before setting forward any additional/alternative thoughts he has to take our course forward.